A two minute short video that was directed by Juno Calypso has been released by Burberry to go along with its holiday campaign. They feature, stars M.I.A, Naomi Campbell, her mother Valarie Morris-Campbell, Matt Smith and Kristin Scott Thomas. It is titled ‘Close Your Eyes and Think of Christmas. The video ends with the mother-daughter model duo relaxing on a couch while wearing Burberry’s signature from head to toe.

The description of the video announces the balance fantasy and reality of a very British Christmas that Juno explores. She draws her own rituals and experiences from the train delays to family togetherness, festive feasts to the unpredictable weather in Britain. For Burberry, there is no time wastage in moving into the holiday spirit. While featuring some of the U.K‘s finest counting Naomi Campbell and her mother, the British brand has now teased its Festive Campaign for the year.

Being a model herself, Valerie Morris-Campbell joins the all-star roster that consists of rapper M.I.A, The Crown’s Matt Smith, photographer and British artist who also shot and directed the video Juno Calypso and actress Kristin Scott Thomas. The portrait showcases both Campbells wearing a black blazer and a white shirt. Although the whole campaign publicizes on Tuesday, November 13, one can get a sneak glimpse at the imagery.

This is not the first time the mother-daughter duo are modelling together.  The bond between mother and daughter has moved the modelling industry in the UK to new heights. The bond is even witnessed in the family matters, Naomi has never met her dad which is accordance to her mother’s wish. They stepped on the Mugler runway together back in 1993, they wore complimentary white and black ensembles. They resumed the double act in 2010 by stepping on the Fashion for Relief charity runway in London. On most occasions, Naomi’s mother accompanies her to fashion events. Valarie has been on Naomi’s side since the start of her career up to when she became a super model.

Last December at the Fashion Awards in London, she brought her mother as her date. On the red carpet, the duo wore all-black ensembles with Valerie being in a fur stole, sleek suit and wore a Bulgari necklace. On the other hand, Naomi was in a tulle gown by Versace. Valarie is the one who taught Naomi how to walk on the runway. In her autobiography which was excerpted by The Guardian in 2016, Naomi recalls her mother showing her how to strut in the hallway at home.

Thank you for reading The International cosmowomensmag.com ® 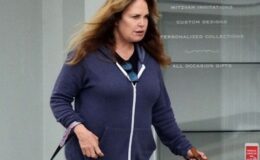